Three way conversations between the subject matter, artist, and viewer give art its meaning and life. But without the viewer, what’s the point? Without the viewer immersing themselves in culture and experiencing things, what’s even more the point?

“Every day, we use language to speak sentences that have never been spoken before. We express thoughts that have never been expressed. All of this is so deeply ingrained that we don’t notice how creative it is,” says cognitive scientist Art Markman, co-editor of the book Tools for Innovation.

Expressing ourselves via any medium is difficult. Listening or watching a community express opinion about anything creative must be challenging on many levels for an artist. That said, many times the artist is not present or no longer alive when that opinion is shared, especially an artist on display in a museum. Creative people love to diverge from the norm, to look at things from multiple positions, and to challenge anything that exists. They also like to share their version or take on life. Creativity flourishes in places of safety and acceptance, born in an atmosphere of generosity, support, and nurturance.

Over thousands of years Aboriginal people have adapted to a changing environment and survived the impact of European colonisation.

The Australian Aboriginal Cultures Gallery shows, in many ways, how they have innovated and developed creative ways of life in one of the world’s harshest continents. Once white man arrived in Australia, Aboriginal creativity, in many ways was misunderstood. But a museum gallery displays an era or time, selecting particular items representing that era in its best light.

Walking into any gallery for the first time is an experience. Questions form like “what will I find?” or “how will I react?” Each step, whether a conversation or viewing a gallery, formulates a new impression that creative people love and thrive on. As a creative myself, walking into a new gallery fills me with anticipation of what will inspire.

And, as I walk into the Australian Aboriginal Cultures Gallery for the first time, the black and white photograph images that stare out from the wall mesmerise me. What a stunningly interesting bunch of people. Each face, while similar, have a character and feature that draw my eyes. But my next stop is to a picture that looks almost Egyptian. In fact, my first thoughts are “why is this painting in this room?”. 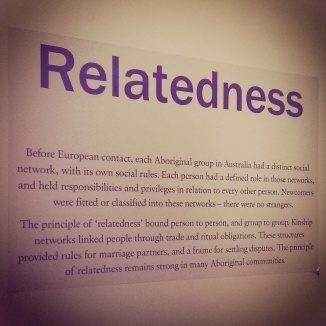 My first impression, after I read who the artist is and the meaning of it as provided by the museum, makes me wonder why we still have negative reactions when it comes to Aboriginal creativity. Are we that creatively devoid that we can’t let it flourish. Are we challenged by the simple concept that something or someone could look different to us, be different to us, and still be respected at the same time?

William Barak was a creative. He was an artist who shared his view of the world, in a time when his culture was under threat. He was born in country of the Wurundjeri people, whose country lay along the Yarra and Plenty Rivers’ in Victoria, and became a leading Indigenous artist and figure in Melbourne during the 19th century. He spent his childhood in traditional Aboriginal fashion, being dubbed ‘King William’. He was a witness to the first European settlers. In the late 1870s when management of Aboriginal affairs came under public criticism, Barak emerged as a respected spokesman.

Jonathon Jones, an artist in his own right, who created artwork for The Barak Commissions in 2011 in celebration of Barak’s life, said of him, ”Like all true leaders Barak possessed a myriad of qualities and rose to the challenge being many things to many people – a cultural ambassador and advocator, a devoted father and an insightful and gifted artist.”

The picture in front of me, with its Egyptian feel, depicts a series of men wearing possum-skin cloaks, in ceremony.

Possum-skin cloaks were clothing worn by Aboriginal people and it is documented they embrace 5,000 years of Aboriginal tradition, cultural knowledge and ritual. To an Aboriginal, wearing a possum-skin cloak, can be an emotional experience. However from the 1820s, when Indigenous people started living on missions, they were no longer able to hunt and were given blankets to wear. The blankets did not provide the same level of waterproof protection as the possum-skin cloaks and I sense, it must have been like they were metaphorically ‘skinned’ of their culture.

“The cloaks were made from numerous possum pelts sewn together with kangaroo sinew, and often decorated with significant incisions on the inside such as clan insignias. As well as being a significant means of keeping warm in this often chilly part of Australia, there was much importance around the making of the cloaks and their wearing. They were handed down through generations as heirlooms.” Reference WIKI

Aboriginal culture states each group in Australia had a distinct social network, with its own rules. Each person had a defined role. At a time when their culture was literally being skinned from their back, it is impressive that such creativity still flourished. The concept of relatedness, as in meaning your relationship with the society around you, is as important to your well being as eating and sleeping. It leads us to thrive in our own community; to grow as a person and to feel comfortable that what we are creating is in fact good.

The principal of Aboriginal relatedness bound person to person, and group to group. With or without possum-skin cloaks, a man’s creativity, like that of the respected elder King William, continues to thrive through his pictures. They live on to tell us the story. I was humbled.

Barak predicted his passing to fall in August when the Wattle blooms along the Yarra River. The vibrancy of the Wattle, with yellow meaning radiance, vitality, energy and even community displays a force that in fact will not die and will rise to the challenge and live on.

Unlike the possum-skin cloaks, now only a memory on canvas.