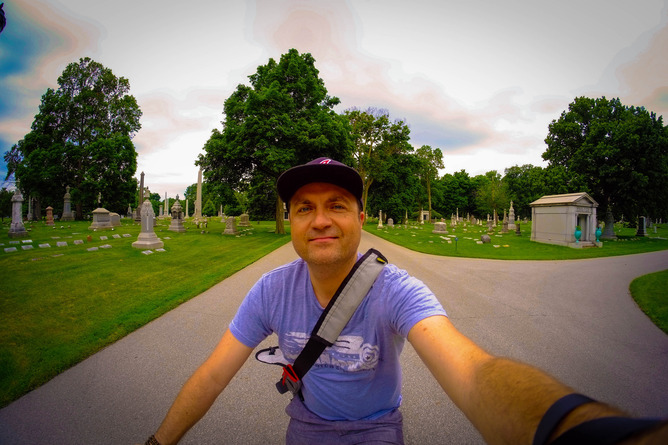 Death and the selfie: welcome to a grave new world 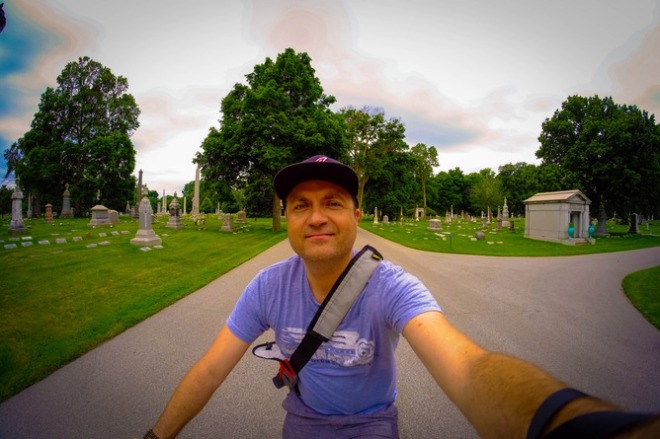 Commonly-used digital media include PowerPoint slides prepared in advance by family, friends, and sometimes the deceased themselves. Less common, but increasing in popularity, is the use of video streaming to screen the funeral for remote friends and family.

The use of mobile phones and cameras by mourners to capture proceedings and share them on social media sites is also becoming increasingly common.

Instagram, as most readers will be aware, allows its users to take photographs, tag and apply filters to these images, and share them. Such apps form part of the “networked cameras” on our mobile devices – incorporating wireless internet, mobile and camera-phone hardware, and image-sharing software.

This allows for instantaneous recording and sharing, including “news” about mundane and ephemeral experiences, and reflects a wider historical shift in social media, from text to image.

The most frequent type of photograph tagged with #funeral is the “funeral selfie”, a use of Instagram that has provoked considerable controversy. In 2013, the media’s attention was drawn to the Tumblr Selfies at Funerals, along with other series of “inappropriate” selfies: “selfies at serious places”, “selfies with homeless people”, and selfies at Auschwitz.

Funeral selfie-takers were accused of diverting attention away from the deceased, while ignoring the gravity and respect required by a funeral.

Our research into digital commemoration has revealed funeral selfies are mostly taken in domestic locations prior to rather than during a service, challenging assumptions and media-panics around teenagers being disrespectful during funeral services.

In addition to selfies, the funeral hashtag was populated by images including group and family shots, often featuring smiling faces. Nearly all group shots appear to have been taken at gatherings or wake-like events following the funeral or memorial service, as opposed to during the service itself.

These smiling faces reflect a wider cultural shift from funeral rituals that mourn the dead to those that celebrate the life of the deceased.

Other types of funeral images draw attention to vehicles in the funeral procession, to locations, places or buildings. These appear to be efforts to capture and communicate the mood and affect of the event by focusing on elements of the natural environment such as the sky, or built environment, such as a church.

While many of the funeral photographs were dedicated to the funerals of family or friends, our analysis also revealed a range of other uses for the hashtag. These included images highlighting the “death” of inanimate objects, especially digital devices such as mobile phones and laptops.

There were photographs commemorating the death of a pet or other animal, typically featuring burial in the earth. The interrelation of media forms and the flow of content across these forms were further accentuated by the prominence of memes and popular culture references.

Many funeral selfies and pictures with the #funeral hashtag appear to be an attempt to share the experience of grief, placing emphasis on the significance of the context in which the image was taken.

The act of sharing photographs associated with funerals through Instagram largely serves a communicative function. We contend the central aim of sharing these images is to signify presence, to share an important context and affective situation with a wider social network.

Technology permits ever-increasing circles of important people, often dispersed over great distances, to be imagined as present, and this suggests a continuing and changing relationship between death and photography.

Photos of the dead

The association between photography and the dead is as old as photography itself. In the late 19th century, following the invention of the daguerreotype, post-mortem photography was a not uncommon practice.

That slowly changed, and by the mid-20th century the dead body was largely hidden, both literally and in photographs. Images of the living person played a bigger role in family memories.

The prevalence of individual portraits, group images and images of funeral rituals and funeral materials indicates another shift in the vernacular uses of photography associated with death.

The Conversation is currently running a series on Death and Dying.

James Meese does not work for, consult to, own shares in or receive funding from any company or organisation that would benefit from this article, and has no relevant affiliations.